The only guaranteed method for the installation of murogeopietra on external wall thermal insulation cladding. 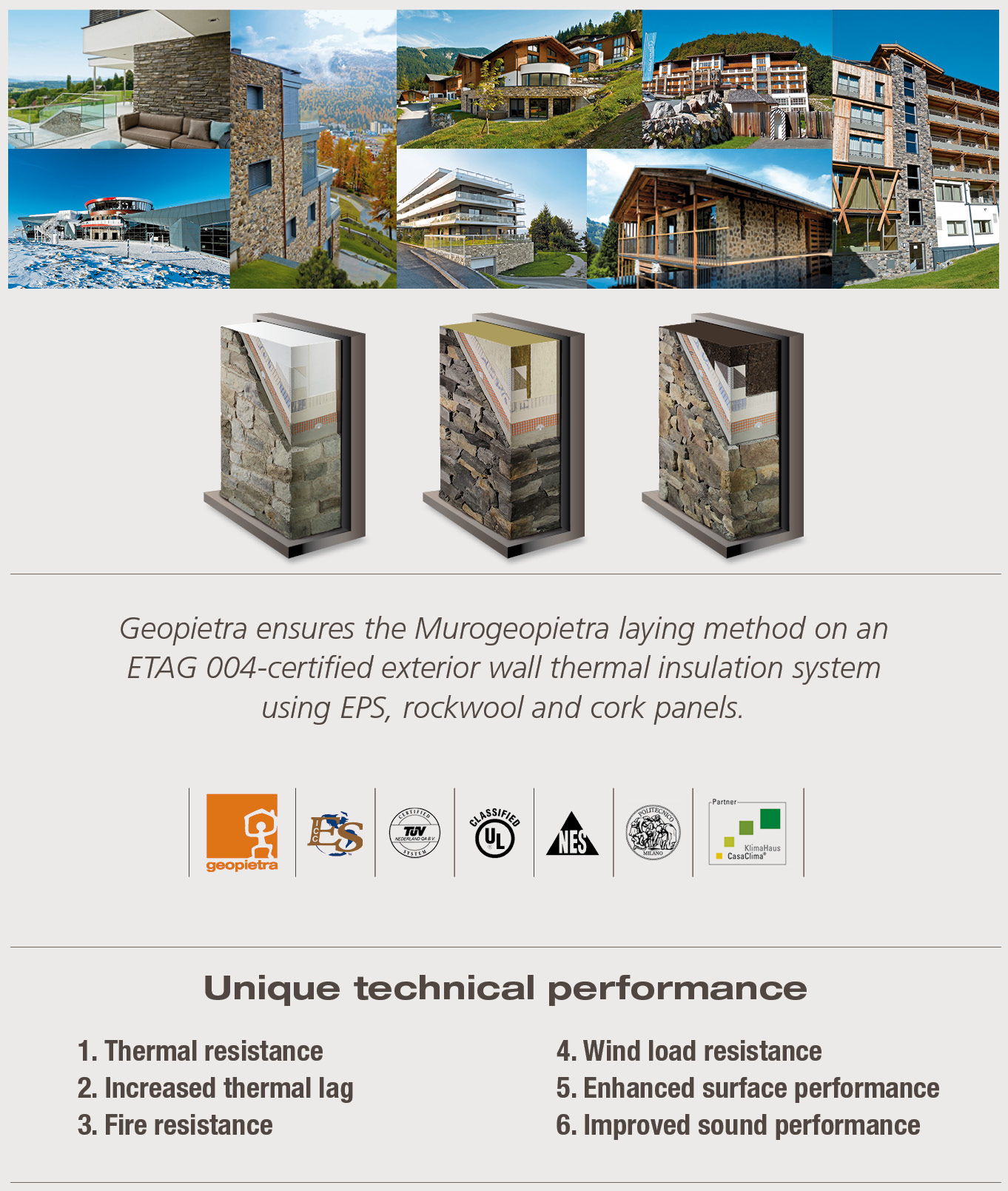 Building planning for quake resistance.
Regulation establishes the essential requirements applicable to buildings and civil engineering in an earthquake zone and provides the rules to represent seismic actions and their combining with other actions, in order to safeguard lives in case of earthquake, to limit damages and permit to civil protection’s most important structures to remain safe.

1.    Wall installation on the machine simulator.
2.    Execution of the 8 phases of the seismic stress test.
3.    Wall checked by the technicians on site after the test:
No collapses, detachments or cracks have been observed. 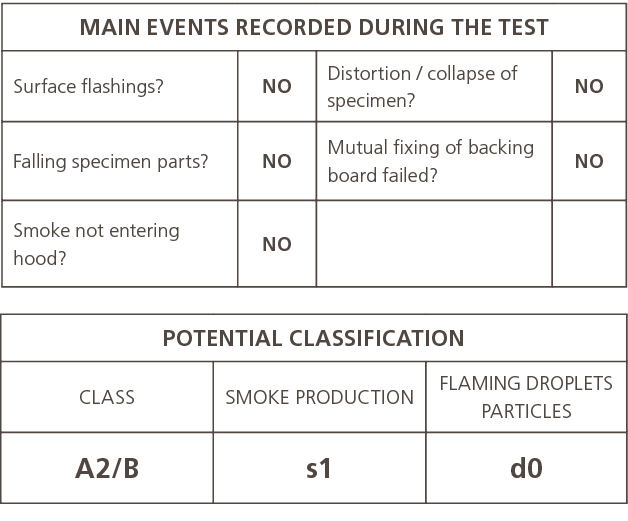 Herewith we report soma data regarding the fire test made on wall covering murogeopietra installed on 160 mm external thermal EPS insulation; this test confirms murogeopietra as a not flammable material and attests a complete lack of toxic smoke development.
This means that murogeopietra protects the undelying insulation against heat, so that sublimation is avoided during the time necessary for evacuation. 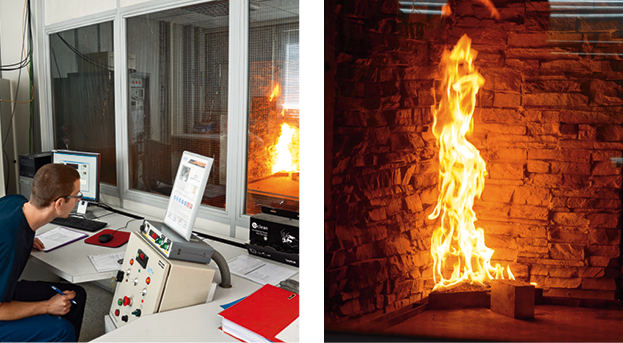 Firmly convinced of the possibility of creating a stone veneer on an insulation coating, we were mainly concerned about the occurrence of any collapse over time and, no less important, a deterioration of the thermal properties of the insulation. Laboratory test results have led us to modify the ingredients of Murogeopietra several times until we obtained a perfect balance.

Great importance was given to safety at the design stage. In Europe there are specific regulations governing escape routes in case of fire. In the case in point, our Murogeopietra cladding system coupled with the EPS insulation coating, which is notoriously sensitive to fire, was not supposed to collapse and obstruct the escape routes during evacuation of the building, which was established in 30 minutes under the action of a flame hitting the escape route directly at 900°C. The test was successful and the insulation (on the whole height of 6 metres) did not collapse at all thanks to the stone veneer’s high thermal inertia, which protected it for the entire time required.

We were greatly concerned about the possible presence of water in the structure due to external weathering or the passage of vapour and its disposal. A test performed at Milan Polytechnic confirmed the validity of the system and the corrections made to the ingredients used. At the same time, we tested the same insulation cladding coated with cut natural stone, and we found that it was impossible to use it, just as we had supposed. The non-modifiable technical values, such as permeability to vapour and weight, significantly affect the efficiency of insulation.

The guaranteed murogeopietra installation solution on EPS preserves the solidity of the façade.

The new LEPIR II test confirms that the murogeopietra solution on EPS fully complies with fire safety standards for buildings.

Geopietra has always been committed to developing innovative materials and installation methods, obtaining endorsements for its products, providing the best guarantees for use on premises, and ensuring the safety and efficiency of the property solutions created.

In 2018 Geopietra deemed it necessary to also validate this process on the façades of buildings subject to specific regulations, such as residential buildings, public buildings, accommodation facilities and tower blocks, with the LEPIR II test. The CSTB facility has specific equipment to test the fire behaviour of façades on buildings subject to specific regulations. French regulation IT 249 on fire safety in public buildings did not previously consider manufactured stone veneer cladding. A solution of this type was tested for the first time in France.

The LEPIR II test involves setting fire to a façade fitted to a structure with two floors. The source that ignites and propagates the fire is on the ground floor and the progress of the fire is controlled through openings in the rear room wall. The temperature and radiant energy are measured. The ETAG 004 procedure is used to fit 20-cm EPS panels providing external insulation to the wall, which is made of perforated cement blocks 20 cm thick.  The Geopietra manufactured stone veneer is then installed using the guaranteed procedure. The window sills are made with Geocover flashing. A panel of rock wool 20 cm thick was inserted at the architrave and jambs of the right window, which was deliberately omitted from the left window to further stress the façade cladding. Two 3-cwt piles of wood were placed on the ground floor in front of the windows, which were open and constituted the flow path propagating the fire. 6 internal thermocouples measured flow path temperatures, and another 14 placed 10 cm from the surface of the wall and distributed vertically over the entire height of the wall, measured the ambient temperature of the façade.

Apart from being a legal requirement, optimising fire safety measures in buildings is important for protecting people and property.

MUROGEOPIETRA ON EPS BEHAVIOR AT FIRE.

1. The fire sources are lit and the initial fumes are released. Right side has rock wool reinforcement above the window.

2. After 1 minute 20 seconds the flames are already engulfing 3/4 of the windows on the upper floor.

3. After 5 minutes the temperature of the façade reaches approximately 800 °C and on the left side (with no rock wool protection) the glazing on the upper floor starts breaking.

4. After 8 minutes the façade reaches the maximum temperature of approximately 1100 °C and flames engulf the left window jambs.

5. After an hour, when all the fire source fuel has been used, it can be observed that the façade has not collapsed or yielded.

6. The fire fighters use strong jets of water to put out the fire, creating considerable thermal shock on the wall, but even when persisting on areas most stressed by the test, no collapse is observed.

Visual inspection after completing the test.

7. The stone cladding was difficult to remove from the left window jamb and architrave. At the crack created through the thermal shock, it can be noted that in the absence of the panel of rock wool, the underlying EPS insulation has sublimed, whereas the guaranteed solution (Technical Manual section 6.21) has contributed to keeping the layers of adhesive, mesh and stone perfectly anchored to the base via the wall plugs.

8. The barrier effect of the rock wool panel was significant in triggering a protective reaction against the flames on the wall, reducing the temperature and preventing the flames from engulfing the frames on the upper floor.

9. The PVC frame on the left window was unable to withstand the fire, allowing the flames to spread inside. Although the right window frame was ruined it withstood the fire, remaining hermetically sealed against the flames and the fumes.

10. It can be observed inside that the cellular cement bricks in the room where the fire propagated literally exploded due to the excessive heat.

murogeopietra on EPS meets criteria for non-propagation of a flame front beyond the next floor level, and is authorised to cover R+2 category public buildings.