An open conversation with nature

Brand new and it's already in the club of the world's leading hotels. For Le Massif , being selected as one of the best hotels in the world, which have their own unique personality and provide hospitality in the most fascinating locations, this is extremely important recognition. These hotels belong to a club of legendary hotels in large cities and wonderful resorts. They are the epitome of excellence, where history has tread, and have become absolute icons of style. Le Massif and Le Petit Massif are situated a short distance from the old town of the charming alpine resort of Courmayeur, at an altitude of 1700 m. The new complex has replaced the Hotel Majestic, which had been out of use for more than 17 years, and represents a magnificent example of urban regeneration.

The hotel/residential design was created by the Courmayeur architect Fabrizio Gandolfo, who designed it in a contemporary style inspired by the larch forests in the area, the warmth of larch and its strong character, which changes with the seasons. The complex exterior expresses the materials with a modern, efficient vibe. Murogeopietra® gives stylish rhythm to high exterior façades embellished with natural decorative features in laser-cut weathering steel. Murogeopietra® is the only stone that can be fitted to cladding at a height, having passed the LEPIR II fire propagation test for regulated building façades. The effect of the wood is recreated by means of special titanium zinc sheeting.

The bulk of Mont Blanc and the spectacle of mountains that rise up to Cervino, Monte Rosa and Gran Paradiso can be viewed all around. The luxurious, 5-star alpine hotel has 87 rooms, which include 7 suites and junior suites, with an accommodation capacity of 223 beds. There are 2 restaurants, one exclusively for guests and the other open to the public, 2 bars, a spa with swimming pool, and a fitness area.

Le Petit Massif is a stylish, modern building over six floors, with 22 luxury flats all with large balconies with a view of Mont Blanc. An illuminated path leads from the flats to the hotel, Le Massif, whose style and character adds prestige to the flats. The 3 underground levels have car parking and storage areas for residents.A focus on the environment is evident not only with the welcoming aesthetics, but also the energy-efficient design, with a completely green heating system supplemented with electricity produced by a photovoltaic system.

The chalet La Loge du Massif in the Plan Checrouit setting has been created to complete the high-end offering. It complements Le Massif and Le Petit Massif and is situated at the old Dolonne cable car entrance. There is a bar, ski room, mini club, terrace with panoramic views and a swimming pool for residents and hotel guests, also in the summer season.

In this article: Murogeopietra® mod. BERGAMO 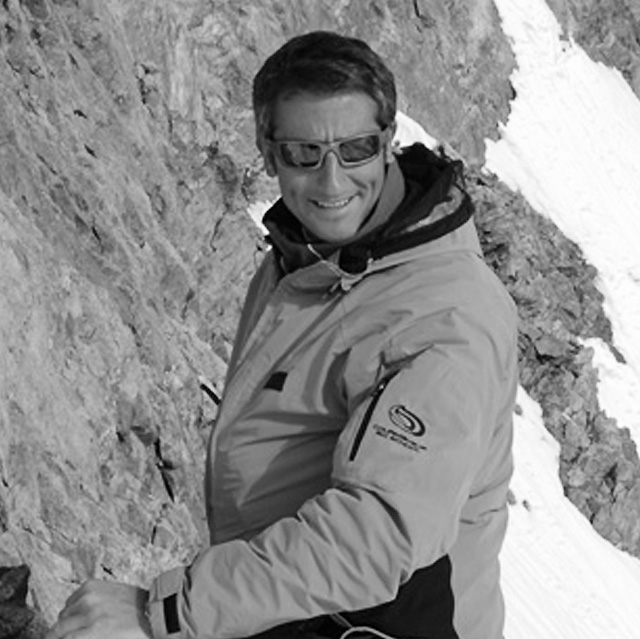 Born and brought up on "bread and snow", it wasn't long before a love for the mountains in all their guises blossomed.

"My favourite season? Winter, obviously. Where an architect's work is slightly quieter and I can enjoy my true passion. What? Everything that enables something or someone to slide on the snow? The pinnacle is definitely skiing - be it downhill, cross-country or ski mountaineering, as long as it's outside. Even though there's no snow in summer, I amuse myself going into the mountains or having simple walks whenever I've got time, even if work and family commitments leave me with little free time."